I had a friend who used to live near me who started an anime night. Her husband was very adamant about watching awesome anime… (He doesn’t really like the battle Shonen that I enjoy watching.) But as you guys know I am traipsing through old anime having been away for a long time. My friends made some awesome recommendations and FMA:B ended up being something they wanted to watch with me. (They had already seen it… It was more for their entertainment than anything else.) I had to make an adjustment because I don’t normally watch dubbed but my friends are solely dub watchers. The dub cast was awesome and only added to my awesome experience. 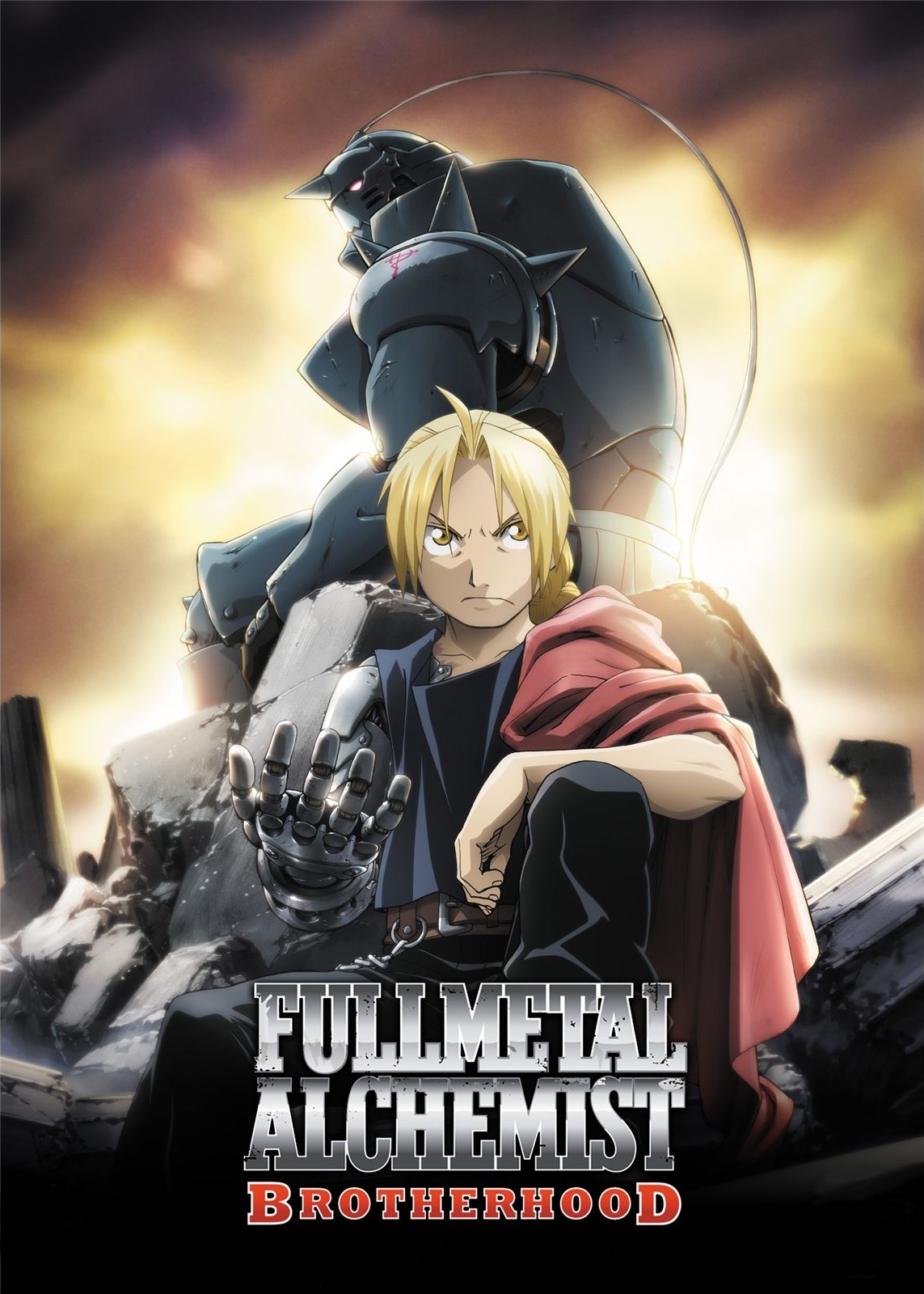 On a side note, I went to a nearby bookstore wearing my new anime t-shirt with Roy Mustang (The Flame Alchemist) on it. And I remember to this day, the store clerk asked me if I watched the original FMA or the revamping of brotherhood… Now when it comes to anime I trust two people (one of which is my friend’s husband who recommended it.) But I was 300% sure of my decision when I figured out that this story was closer to the manga… than the original story. For some reason, the guy was irritated that I pointed out I would prefer to watch something that more closely resembles the original story… he seemed like he wanted to argue the point… LOL… good times with anime nerds. Anyways let’s break into what the story is about…

Edward and Alphonse Elric live with their mother Trisha in the village of Resembool in the country of Amestris. Their father, Hohenheim, left his family while the boys were young. Trisha noticed the boys had an aptitude for Alchemy. When their mother dies, they live with their best friend Winry Rockbell, and her grandmother Pinako. The boys traveled the world to advance their alchemic training under Izumi Curtis. When they return home, the two decide to try to bring their mother back to life with alchemy. However, human transmutation is a taboo, as it is impossible to do so properly. Edward explains why human transmutation is looked upon negatively.

“Alchemy; the science of understanding the structure of matter, breaking it down, then reconstructing it as something else. It can even make gold from lead. But alchemy is a science, so it must follow the natural laws: To create, something of equal value must be lost. This is the principle of Equivalent Exchange. But on that night, I learned the value of some things can’t be measured on a simple scale. My brother and I knew the laws of science, of Equivalent Exchange, that gain required sacrifice, that something had to be taken from us. But we thought there was nothing more we could lose, we were wrong…” – Edward Elric

Humankind cannot gain anything without first giving something in return. To obtain, something of equal value must be lost. That is alchemy’s first law of Equivalent Exchange. In those days, we really believed that to be the world’s one, and only truth.” – Alphonse Elric

The laws of equivalent exchange leave Ed without his left leg and Alphonse is completely obliterated. (It is a horrendous scene to watch and to this day I have not rewatched it… You can tell right away that the boys realized they fucked up big time but the damage is done. There has been a lot of scenes that I have rewatched millions of times but not that one.) In a last-ditch attempt to keep his brother alive, Ed sacrifices his right arm to bring Al’s soul back and houses it in a nearby suit of armor. (It cost him an arm and a leg… I know. I’m sorry.) Later, Ed manages life with automail prosthetics. Automail limbs are generally made with a full steel skeletal frame layered with steel armor-plating to protect the various wires and intricate machinery inside. They are normally linked directly to the nervous system and powered by taking electrical pulses from the nerves to power and regulate the various electric motors and pneumatic actuators inside. Automail became advanced enough to double as prosthetic body parts for amputees desiring something more versatile than normal prosthetic limbs.

The brothers decided to burn down their childhood home and head to the state capital to become a state-sanctioned alchemist. After passing the exam, Ed is dubbed the “Fullmetal Alchemist” by the State Military (mostly because of the aforementioned automail… The running gag becomes the assumption that Alphonse is the Full Metal Alchemist because of the suit of armor. Hilarious.), and the brothers begin their quest to regain their full bodies back through the fabled Philosopher’s Stone under the direction of Colonel Roy Mustang. (Colonel Mustang is my favorite character. You will notice that he appears on this countdown many times. You have been warned. Don’t be surprised.) Along the way, they discover a deep government conspiracy to hide the true nature of the Philosopher’s Stone that involves the homunculi, the alchemists of the neighboring nation of Xing, the scarred man from the war-torn nation of Ishval, and their own father’s past. (And OMG when I tell you their father has the past of all pasts.)

So I have made a list of my top moments from Full Metal Alchemist: Brotherhood. *SPOILERS* In no particular order…

I enjoyed this show so much. It is in my top 10. If you haven’t seen it. Watch it. If you have, let me know your favorite moments. That is all for now.